Good morning and Happy Monday! I hope everyone had a great weekend!! 🙂

A few weeks ago we received news about the dreaded “F” word at work (a.k.a. Furlough). Thankfully, I can break mine apart instead of taking it all at once. I decided to take mine for 5 Wednesdays and keep my daughter home from the Summer Program at her school. Save money when not making money AND spend extra time with my daughter than I usually get. It was a win-win! Last week was our first Mom and Daughter Day. I don’t think it could have been more perfect!

We started breakfast with pancakes. They were requested to be purple and with sprinkles. So that is what we had. 😉

I have to admit, she had a pretty cute idea even though I was skeptical at first.

Then we watched a few cartoons. (Some Paw Patrol, Team Umi Zoomi, and Dora).

After about an hour of TV I cut it off and we commenced to a little arts and crafts time! She loves it. Here we made a caterpillar. We also made a Father’s Day craft for dad… but that is for a later post.

Here she did a little free painting and decided this was for Daddy. Together they decided it was “the Earf.” (Earth) 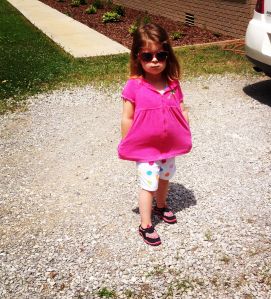 About noon we headed to the Splash Pad in town. Look out world here we come. 😉 I do not know how she is such a diva, but it is adorable.

She played on the playground a while before actually hitting the water and sprinklers. 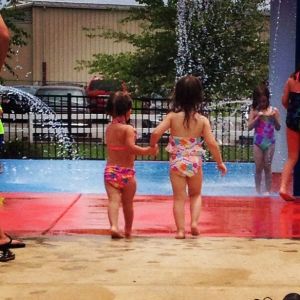 While we were at the splash pad, I saw a girl I graduated with and she had her daughter with her, who is a few months younger than mine. They had never seen each other before, but as you can see in this picture… you would never imagine they didn’t know each other. It was sweet!!

We headed home around 3 and played dress up for a while until Dad came home from work. We played Dr. with her Doc McStuffins set and outfit and then all cleaned up for church. We ended the evening by attending Wednesday night service at our church and picking up some fast food on our way home.

It was a pretty perfect day for this Mama! 🙂

Have you ever had to take a furlough? Did you decide to make the best of it with your kids? If so, what activities did you plan out that we might could take advantage of??

Welcome to my Blog!

I’m so glad you came by. My name is Cindy; I am a Christian, fiance, mother, grad student, and Girl Scout Troop Leader. I work a full-time job outside of the home, but love to blog about things going on in my life, products I love, and all of my rambling adventures.
I am also the Instagramer for Alabama Women Bloggers. Contact me with your photos or photo ideas!